A journalist, documentarian, author, photographer, and editor, Diana Greene also works as a visiting artist in the schools, teaching students narrative writing and photography. Her photographs have been exhibited at The Southeastern Center for Contemporary Art, The Light Factory in Charlotte, N.C., PhotoSPIVA, university and commercial galleries as well as public libraries.  In 2011, the University of Melbourne added several of her works to its permanent collection. She has earned numerous awards and fellowships, including the Weir Farm artist in residency fellowship in 2010, and residencies at the Virginia Center for the Creative Arts.  She's also been awarded teaching grants from the Arts Councils of Arizona, North Carolina, and Winston-Salem/Forsyth County. 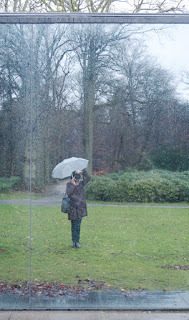 How would you describe what you do?

I’m a Sagittarian. Couldn’t you have started with something simple like what’s my sign! I was born on December fifth at 8:18 in the morning, which may be a fact or it may be the train my father always took into Manhattan, the 8:18. In any case, I create photo narratives that are loosely based on real life but made with a great deal of chance and looseness. I blend documentary work with dream life. Long ago, when I began writing personal essays, I decided to call my writing faction – a blend between fact and fiction. I like the blurry lines, the smudgy possibilities, the left out and inserted elements. This year I created a performance piece called A Dozen Dresses: The ReCollection, which finally distilled all my loves – stories, images, music, video, memory, humor and emotion. I spent a long time learning photography and this project made me feel that my writing and images really danced well together on stage that night.

Not to be forgotten, I also teach. I absolutely love it and find it a creative charge to figure out how to explain well what I do to others and inspire them to try. I’m a creativity evangelist.

Is this different than what other people think you do?

I have no idea what people think I do, but I bet they’re confused because I am.

How do you know if you’re on the right track with a project?

Ideas and images start showing up, waking me up, bringing me up to the studio where I work.

How do you go about making choices?

Does it tell you anything that I could answer that question in a number of ways? Choices are a part of every moment. In my work, I like to limit the elements in play. There is something minimal and tailored about the work I create. I love form. I love playing with forms. The work I make is always changing, so the form also varies and I’ve had to learn a ton of techniques and technology to keep pace with my muse. I began my career at a CBS radio station. Then I went to CNN. Television and radio are extremely formulaic, tight, and exhilarating. Photography is also confined by its frame, its form - the rectangle or square. I’ve written almost everything but have never wanted to write a novel, for example – too rambling and vast. I’m guided by two ideas that are not my own – one says art is selection and the other defines art as a means to creating experience. I do aim to create an experience whether it’s in a still frame, a story, or a classroom.

How do you know when you’re done?

I start ruining the work.

It’s a big, faintly pink room with a high ceiling and three windows but not enough light. I sit at an old wooden desk that my husband bought for me when Pleasants Hardware went out of business. It’s a lovely beast. Oh, and I had about 12,000 images on bulletin boards that line the wall across from my computer, but early this year I took every one of them down. It was time to clean the slate. Now I have big sheets of beautiful blue handmade paper covering up the cork and one quote I posted last month. It’s from guitarist and singer, Seth Avett, who said in an interview: “Anytime something’s not going off the rails, you should be really grateful for it.”

What are your essential tools?

What’s the most surprising tool you use? 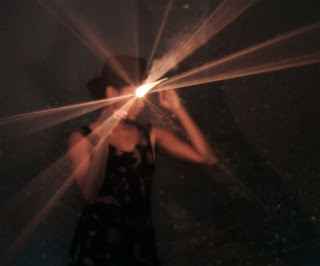 Saran Wrap, which I use to warp the lens and reduce reality.

What was your biggest mistake or the one you learned the most from?

Truth be told, I’m a serious late bloomer. I lost some time being a rebellious little rascal – it was fun, possibly a mistake, but not terribly instructive. A mistake that taught me something was the failed memoir I wrote shortly after my father died of leukemia in 1998. Long story short: I found a 280 page oral history of my great grandmother, Ada Alden, stashed in my dad’s desk drawer. Her story blew my mind. She was an award-winning poet, a Virginian born on the cusp of the Civil War, a wild pantheist, Victorian naturalist, mother of five, a widow, the second wife Henry Mills Alden, the publisher of Harper’s Weekly, the mother in law of Joyce Kilmer, and my father’s grandmother who lived with him when he was a boy growing up in a house with three brothers, two parents, and one bathroom. I wrote an essay about discovering her after my father died. The piece touched on God, destiny, dogs and light. My agent said, great work, now write a memoir.

Oh, okay, I said, and commenced a two-year writing project that sucked wind and cost me my agent.

Still, I got to spend time with Ada, who became in important and mysterious ways the mother I never had; I also learned tons about the Civil War; and I grieved for my father in a creative way.

What’s the worst piece of advice you’ve ever been given?

You must choose one thing.

Approach life with a sense of wonder. Ada Alden taught me that. When I bring myself back to wonder, the shades lift up.

Blogs of Interest (to me)